Barbara Girardi and Live4Evan Recognized by the Kraft Family, Patriots Foundation, and Gillette 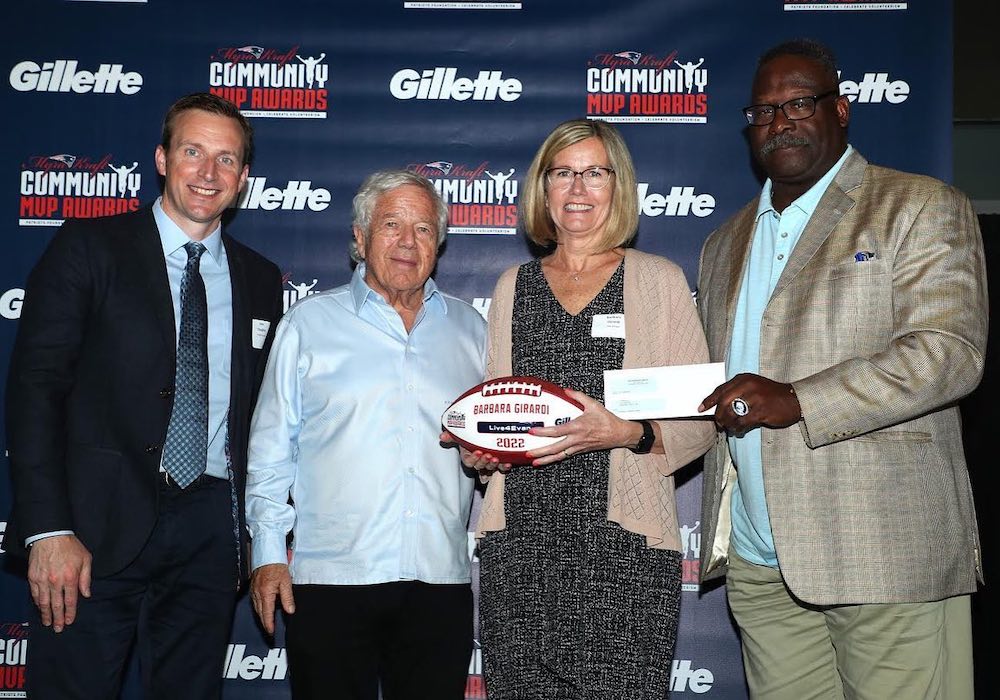 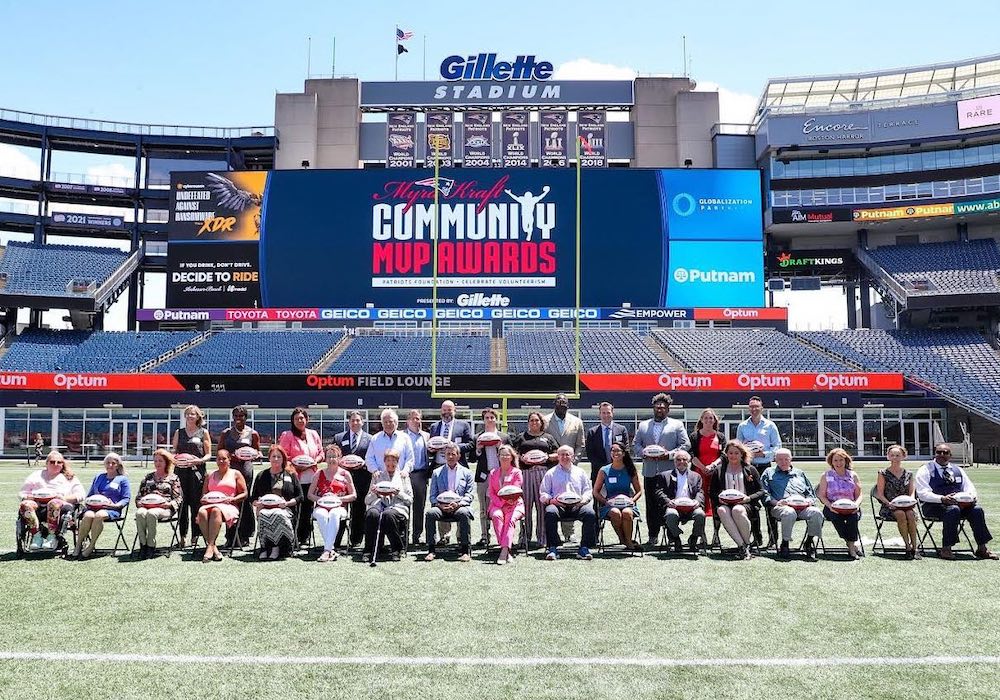 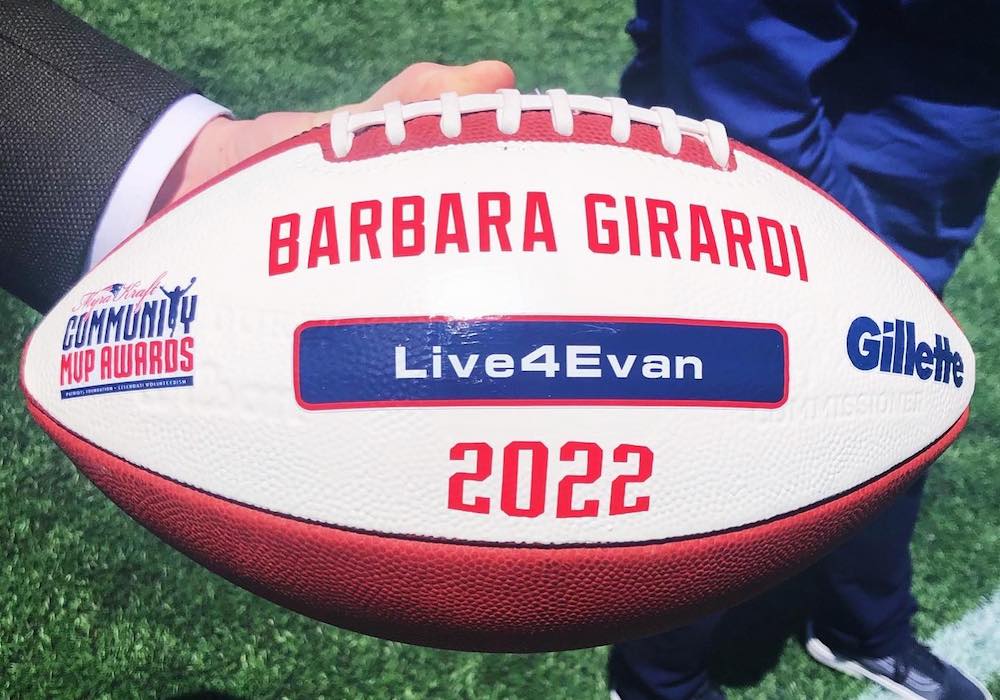 Twenty-six volunteers were recognized during an awards luncheon at Gillette Stadium on Wednesday, June 8

Barbara Giardi of Hopkinton, Mass. presented with $10,000 donation for Live4Evan

FOXBOROUGH, Mass. – For the past 25 years, the Kraft family and the New England Patriots Foundation have been recognizing volunteers for going above and beyond to give back to their communities through the Myra Kraft Community MVP Awards program. Formerly known as the Community Quarterback Awards, this volunteer recognition was renamed in 2011 in memory of Myra Kraft.

On Wednesday, June 8, 26 volunteers were recognized for their contributions at an awards ceremony at Gillette Stadium. In total, $275,000 in donations were distributed to the nonprofits represented by each volunteer. Twenty-five organizations each received $10,000 and the Grimes King Foundation for the Elderly received this year’s grand prize of $25,000.

“Of all the community initiatives we support through the Patriots Foundation, this was always Myra’s favorite and I am proud that we continue to honor her legacy of volunteerism by recognizing the amazing work of dozens of volunteers each year,” said Patriots Chairman and CEO Robert Kraft. “She loved meeting all of the honorees and hearing their heartwarming stories of volunteerism. There are so many people doing great things in our communities. It restores all faith in humanity. We enjoyed reviewing this year’s applications and selecting the 26 dedicated individuals that are helping to make the world a better place.”

Gillette, a longtime supporter of the New England Patriots and a cornerstone partner of the Patriots Foundation, served as the presenting sponsor for this year’s program. On hand to congratulate the award winners were Robert Kraft, President of Kraft Family Philanthropies Josh Kraft, Patriots, College and Pro Football Hall of Famer and Patriots Executive Director of Community Affairs Andre Tippett and John Claughton, VP of Grooming, North America, Procter & Gamble.

“This program has always been my family’s favorite charitable initiative,” said Josh Kraft. “Each year, we read hundreds of heartfelt stories of volunteerism and we are honored to celebrate those who go above and beyond to help others. We were excited to partner with our good friends at Gillette for this year’s program and appreciate their shared commitment to building stronger New England communities.”

“As a long-time witness of the great and positive impact the Kraft family has had on the New England community, Gillette could not be more proud to share in honoring Myra’s legacy as the presenting sponsor of the Myra Kraft MVP Awards,” said John Claughton. “Joined by the same drive to be a force for good for the communities we serve, Gillette looks forward to supporting all the honorees and volunteers that continue the work Myra so passionately championed.”

Barbara Giardi of Hopkinton, Mass. was recognized as one of this year’s honorees and presented with a $10,000 donation for Live4Evan.

Barbara created Live4Evan in memory of her son, who passed away from a congenital heart defect at the age of 20. She established an independent housing program for families receiving long-term cardiac care in the Greater Boston area.

Barbara coordinates apartment availability for families and offers support during their stay. She works closely with Boston-area hospitals and social workers to ensure they receive proper care and support. Since its inception, the nonprofit has opened five apartments and housed more than 100 families.

“It is such a tremendous honor to be considered alongside the other amazing volunteers for this award,” said Barbara. “Live4Evan helps families with the continued support of our incredible community and partners such as Gillette and the New England Patriots Foundation. Their contribution allows is to work with families in crisis, who need a place to stay. This award means the world to me and the entire Live4Evan organization.”

Since its inception, the Myra Kraft Community MVP Awards program has recognized more than 450 volunteers and donated more than $3 million to support nonprofit organizations across New England.

We provide temporary housing for families of children with congenital heart disease who need to travel into the Boston area to get their child care. #EVANSWAY

100% of your money provides housing for families of children with heart disease.

Learn how you can make an impact.

Support Live4Evan by starting your shopping at smile.amazon.com.